For impossibility. To be like father, stripped of womanhood – disemboweled. Femininity removed like a shroud. And yet I am female, there is no escaping it. Your very closeness, maleness, mocking my allusions to simulation.

Can there exist a relation in time where I do not run from the role of [m]other? To be dressed fully in your skin, amongst my musty books – the back-seat father is who I long to be, safely residing at a distance fit for thought and matter. The keen observer. The warm knee as you nestle into my cheek, listening to the gravel of my voice smoothing over your eyelids. Lipids of time, caught in a net of organza.

Like a once tame beast I lie between girldom and fatherhood. The two irrevocably intertwined to result in schizophrenic contusions to my mind, wherein girleens (to steal a Nabakovian turn of phrase) sprout phallic ganglia and grow to fondle their own desire. Girls do not become fathers I am told. But mothers, with mammary glands thick with the rancid echo of milk. For where do I go, except back to the well-thumbed pages of Lolita to search for sanity in their madness.

Humbert Humbert carries with him my own fear of womanliness, he sees them as ‘the coffin of coarse female flesh within which [his] nymphets are buried alive.’ [1] I too like a recumbent H.H. wish to hold onto girlish youth, and its pubescent beauty. For in order to become ‘mother’ I leave behind the balmy elms of childhood. And while I myself stay childless, I am able to always remain a girl, not yet a ‘woman’. With contraceptive devices enacting a halt to my monthly cycle, I linger forever encapsulated in a state of my perceived pre-womanhood. But now I have relinquished this synthetic hold, and I am again daunted with the swell of maturing ripeness. For now I am able to stave it off, still within the first wave of my returned cyclical shedding of rubied jewels, I feel pubescent, basking in that shadow of safe retreat. 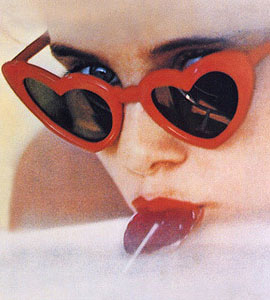